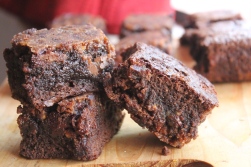 As some of you might have noticed, I do some things at the weekend which involve not sitting down. When you’re halfway up a mountain, there is nothing like shoving something sweet in your gob and trogging upwards. While haribo tangfastics have their place (normally in the left outer pocket of my rucksack), sometimes you want something more substantial. For this reason, I take with me a plethora of snacks and goodies on the weekends, including some homemade delights. Food is joy, not just fuel – others do disagree with me here and I’ve had a few heated pub debates. Never ever look up a drink called Huel, it will ruin your day.

Anyway, being a generous soul (jk just compulsively reliant on other people’s approval) I tend to share out what I’ve made. And then people ask me for the recipe.

Now, I have to say, unlike my savoury food recipes which I just throw together on the fly (poor fly), I cannot take entire credit for my baking. I often google extensively and take the best bits from other recipes and then smush them all together. That said, Nigella is my absolute go-to for luxurious, rich, busty recipes which call for things like “The silken nectar of the chocolate flower, brimming with heady notes; reminiscent of the tranquil mini-break I took to the Maldives last Autumn. Sheer bliss”.  Or something like that. Anyhoo, sometimes, as a student, I don’t have all the crap she wants me to out in her recipes (maple syrup is more expensive than printer ink and Lidl doesn’t sell chocolate extract), plus her recipes often make for too much even for me and a few friends, so I tend to play around with quantities and ingredients.

BBC good food recipes provide me with a a basic, customisable platform that I can corrupt with all sorts of calorie laden goodies and new flavour combinations. Remember, calories dunnae count when you’re walking. Other food bloggers and writers answer my questions on raising agents or fat content and I have found a couple of all-star recipes for other bakes that I’ll be sharing soon. I have done a hell of a lot more baking than just the recipes in the Good Craic Good Snack series, but they’re what I’ve brought into the highlands so far – the next blog series will be on procrastibaking.

But for now, I’ll do some blog posts this week on the recipes that I’ve used for walking. I tried putting them all in the same post but realised this would take years and people would get very bored. I’m starting with a classic brownie recipe, based on Nigella but customised by me.

Mate, these are the bomb. Everyone says their mum’s brownies are the best, and I respect that because my mum’s brownies are the best, but these take fudgy and luxurious to a whole new level. I know some people prefer cakey and some like crumbly but I’m firmly rooted in the it should be like eating fudge but you can eat more of it camp. This is a blessing when you need something dense and enormously bad for you as the cold wind slaps you around the face and your eyeballs freeze over.

I use wholemeal flour and nuts to up the fibre count to make all that sugar go a little further in terms of calorie burn. If you’re really interested in what makes a good brownie, Felicity Cloake, food writer at the Guardian (my actual real-life dream job – we even have the same name; hand-over would be seamless) has written an entire article on the subject of brownies, with a recipe at the bottom. But I’m sticking (literally) with Nigella because goo.

I’ve halved the recipe here and replaced the expensive chocolate with less expensive chocolate and added nut mix instead of walnuts for cost effectiveness. I also altered the sugar content and used salted butter instead of adding extra salt. Not that this is a health conscious recipe or anything: I added milk chocolate chunks for goodness sake. Decadence is the word of the day.

Find a square pan that’s quite small – like 25 x 15 x 5cm, or about the size of a big hardback book. Grease it proper and line it with some baking paper if you have such a thing in ur student kitchen. Put your oven to about 180.

Melt the butter and the chocolate in the microwave on 30 second intervals in a big bowl (not a cereal bowl) or jug, stirring a lot until it’s smooth. This is quicker and less effort than doing  a ban-Marie.

Put the sugar and eggs into a different bowl and beat them massively. I have a balloon whisk that was perfect for this but Any Spoon Will Do. When the chocolate mixture is cool enough to harbour life, add it to the eggs and sugar and stir stir stir. Add the vanilla and the orange zest if you’re fancy. Sift the flour into the bowl and beat until it’s all gorgeous and sumptuous and silken and all of the other euphonious adjectives. Add the nuts and chopped chocolate and give it all a final stir before pouring it lavishly into the tin and popping (gosh, I do sound like Nigella now) into the oven. This is the bit where I got a little impatient  –  it says 25-30 mins on the recipe but this is for the full size one. So I thought, ahh 20 minutes should do it for this – but nay, it was still liquid in the middle after 20 mins; mind you I like a fudge brownie but this was too far. I put the timer (phone, I ain’t that fancy) on for another 7 mins and Lo! It was perfection. I wrapped it lovingly in greaseproof paper and foil and left it in the fridge for hours to fudge up before slicing into chunky chunks and packing safely it into the top of my bag, comforted in the knowledge that if I did get lost or separated from the group, I’d have around 4500 calories to see me through.

*Craic means banter here – yeah, I didn’t know either, so the first time someone said “he’s got good craic,” I thought they were on about cocaine. Perhaps worryingly, this didn’t surprise me as much as I thought it would.

I coined this phrase in the middle of a bog, eating handfuls of crumbly flapjack. Such fun.